A Sound Designer’s Conundrum: How to Create Something from Nothing 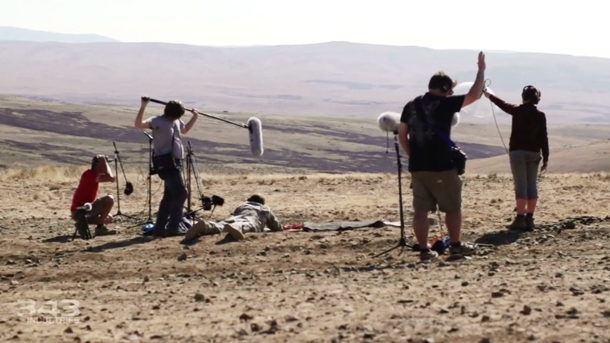 I’d like to share a story with you: a story that found me at the bottom of my outdoor swimming pool in the middle of October.  A story that would be my elaborate response if someone were to ask me something along the lines of “Why is sound design fun,” and, “What’s the most memorable/crazy/funny thing that you’ve done to record something?” (A question I have actually been asked before.)

Well, besides throwing chunks of dried mud at sheep from across a barbed wire fence to get “baaaah” sounds (another self-degrading story), this is the next best thing.  In this post, I’ll talk about what I believe are the main types of sound design in what I like to call “the sound design creation and interpretation spectrum.”

But first, watch this short film.

Wasn’t that terrifying, yet beautiful?  It’s a prime example of how sound design can enhance the mood of a visual piece, while not being at all realistic or conform to expectations of what something “should” sound like.  It’s what makes sound design most fulfilling: the idea that there are endless interpretations of how something can sound, depending on the mood you’re attempting to convey.

When talking about creating sound effects for games, I like to think that there are four types:

1. Realistic– These sound effects have a tight bearing on reality. To put simply, if you were to record something, such a footstep, a door closing, or a person laughing, that sound would simply have to be polished in your recording software of choice, and would otherwise have no effects or changes added to it.  Realistic sounds are used when the intended sound for the game is something you have access to recording yourself, and there is little to no need for actual design post-recording.

Here’s an example of the process I went through when designing sounds for Castor & Pollux, a UT Dallas student-produced game directed by our very own Steve Zapata.

These are footsteps that I recorded for the Pollux character this last spring for the game.  The first section on the track is the original recording with some slight background noise fading, followed by some equalizing in order to make the steps sound lighter, since Pollux is rather small.  After some noise was added to give it some subtle crunching, the third section is the final version.

Overall, the sound is categorized as realistic because little modification was done to the sound after recording, and the original recording’s purpose is still clear in the final product.

2. Semi-Realistic – This is a type of sound effect that’s restricted by what you have available to you. It’s intended to sound like something realistic that people know and physically understand, but you don’t have the resources to go and record the sound.  For example, if you need the sound of an airplane taking off, you can’t just take your recording equipment to nearest airstrip and record the next plane as it rounds the runway (not at DFW International Airport, anyway).

These are sound effects that are intended to sound like a realistic sound, but are made by merging sounds together, or by adding post-recording design to other sounds.  Other examples may include shooting a gun, a pinball hitting a pinball bumper, or any sort of animal noises that would be very difficult to record coming from the actual animal that makes them.

This is the simple process I used for creating one of the pinball-esque bumper sounds that you hear in our game, Furball.  This sound is categorized as semi-realistic because it required me to use other recorded sounds in order to design it.  All in all, I used the sound of an old fashioned alarm clock bell and two separate instances of a plastic backscratcher being grinded against a metal one.  Based off of real life reference, I was able to create a sound that is similar to what someone would think an actual pinball bumper would sound like.

The first section of the track is the original sounds and the second is the final sound combination.

3. Semi-Abstract– I like to think of this type as the “split up and attack” sounds. These are sound effects that have some sort of physical bearing on reality, but add in at least one abstract element.  By abstract, I mean something that doesn’t have bearing on physics or can be found in the physical world, and can be interpreted differently by different people.  For example, if you’re asked for a “walking on metal” sound effect for a game that is supposed to take place on an alien space station and has the player take the role of a giant mutated spider, naturally there are elements you would understand right away and elements that would make you sit back and think, “What would this sound like?”  You understand through experience in the physical world that:

There are also other questions to take into account that can help you further relate the sound to the physical world:

These are all questions to take into account when designing the sound because they give you more insight and reference to the physical world and an idea of what something should sound like.

Also, you know what something hitting metal sounds like, so you’re able to “split up and attack” the elements of the sound one by one.  As the sounds get more complicated, you could find yourself merging together a large amount of recorded sounds, in which each satisfies an element.  For example, if your giant, menacing, mutated spider with claws had to walk through toxic alien sludge, you could record individual sounds to satisfy:

Naturally, these would all be added together and further modified in software, as well as combined with a slight abstract alien planet reverb, if need be.  Other examples may include: a UFO or aircraft breaking through a concrete wall, a futuristic computer processing information, etc.

The sound effect I wanted to show for this type is a sound I made for the UT Dallas student game Shroud, directed by Tyler Tomaseski.  The intended sound is an abstract cable grapple, connecting the two characters in the game when they get close enough to each other.  While the sound has abstract elements, I understood what sort of sounds would be best to record by breaking the elements into pieces.

4. Abstract– These sound effects are the most self-explanatory: they’re the ones that have no bearing to the physical world whatsoever and are only designed through creativity and attempting to understand how the sound would actually be made, using what you know about the world. As he explains in an interview series describing his creative process behind the sound design for Pixar’s Wall-E, Ben Burtt says that when working on a sound, he likes to think about how the object making the sound would be powered, and the actual physics behind it.

If your task is to create a UFO start-up sound, your only real points of reference are what aircrafts sound like in the real world when they start up, as well as other UFO start-up sounds that people have made in the past.  Ultimately, it all comes down to your confidence as a sound designer, your understanding of your game’s world and aesthetic, and your creativity.  Other examples might include: portals, alien creatures, menu sounds, etc.

I wanted to show another sound effect from the game Castor & Pollux for the abstract section because there were quite a few that had no real physical references.  This track shows the steps for the creation of one of the star sounds (when one of the players pushes the stars on the screen to navigate the environment).

The first section is the raw recording of a scarf made out of plastic dabloon coins being shaken.  The second section is the same sound, but with effects and equalizing.  The third and fourth sections add necessary designed MIDI instruments, a hang drum and chimes, in order to add to the magical feel of the sound effect.  The fifth section is the final, completed sound with the hang drum properly pitched.

Now, for the story.  When it came time to add the water splash sounds to the InnerSpace trailer, I found myself wondering exactly what it would sound like.  Naturally I didn’t have a small flyable plane lying around, so I knew I had to create this semi-abstract sound by breaking its elements up and recording them separately.  I wandered my house attempting to find objects that I could imagine would be ballistically similar to a small, almost bird-shaped plane.

I gathered pie tins, barbeque tongs, metal cooling trays, everything else I could think of, and set my recording equipment up next to my swimming pool.  I spent an hour recording myself throwing these items into the pool, only to realize that I didn’t have anything to fish them out with.

The irony of this story is that the splash sound of me jumping into the (freezing) pool to fetch the items is actually used in the final sound effect.  You can hear the progression below.  I ended up using a splash from a mesh cooling tray to simulate the thin wings of the plane, barbeque tongs to resemble the sharply pointed front, and my own splash to give the splash weight.

The first section of the track below plays through the individual recordings, then combines them.  Effects and equalizing are added to give the splash a more abstract feel, ultimately leading up to the final sound.

As for the story about throwing chunks of dried mud at sheep, that’ll have to wait for another post…