Making the jump from Maya to Blender can seem daunting at first, particularly given Blender’s negative, but undeserved, reputation for being overly complex and difficult to use. In the following post I hope to demystify Blender as a tool in order to help minimize barriers to entry and to help you make a more informed decision when considering the switch. This post is meant to illuminate some of the ease-of-use functions that Blender offers for modelers. (It won’t cover the following: scene navigation, adding geometry to a scene, basic selection & confirmation, saving, exporting, etc.) In this post, I’m going to assume the reader’s familiarity with the Autodesk Maya software package. Otherwise, said topics and their particularities are readily accessible.

With that said, here’s what you need to know to get up to speed with Blender 3D:

Coming from Maya, one of the most useful modeling tools I found in Blender was the Numpad Camera System. The numbers 7, 1, and 3 map to Top, Front, and Side views, respectively, and allow for quick switching between orthogonal views without changing windows or sacrificing screen space for more viewports. Additionally, the number 5 will switch between Orthographic and Perspective cameras, allowing for a greater amount flexibility when defining shapes or matching forms. These features will only work with a numpad.

Switching between angles with the Numpad. Pressing Ctrl + NUMPAD_7, NUMPAD_1, or NUMPAD_3 will show the opposite camera angles (Bottom, Back, Side).

One of the most useful distinctions between Blender and other 3D modeling packages is its integration of Reference Images. Put simply, the information is there when needed and gone when not. To setup Image Planes in Blender, open the Properties Shelf (3D Viewport > N > Background Images > Add Image) 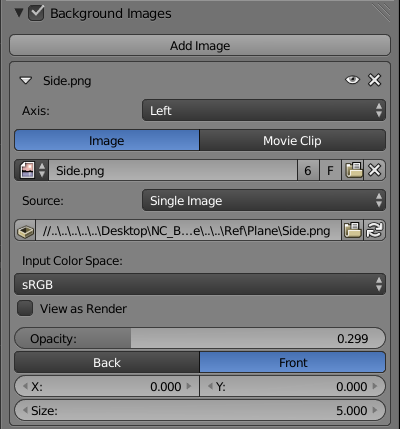 From here you can load any reference image you want, set it to whichever Axis (view) you want, and adjust its placement in the scene. Additionally, I found setting the opacity to ~30% and using the Front option was the easiest way to use the tool.

Image planes automatically hide themselves when the camera isn’t locked to one of the cardinal axes. NOTE: Image planes will only appear in an Orthographic viewport, so make sure you aren’t in Perspective.

When considering efficiency and productivity, the goal is to maximize the speed and control one has, particularly in the actions used most. Blender takes this to heart with its Axis Locking integration. I’ll demonstrate Axis Locking with the Grab/Translate function, but it’s implementation is global across scale, rotate, and extrude as well.

Pressing G allows the translation of a selected object and a RMB Click will confirm its placement. Prior to confirmation, pressing X, Y, or Z will constrain the objects translation to the selected axis.

These constraints can be used with any kind of selection (Edge selection above).

Another useful tool to speed up your modeling is the Vertex Snap toggle. Users can additionally hold CTRL when translating a selected vertex to switch the toggle to its opposite state. I prefer working with the toggle disabled and only enabling it when needed.

NOTE: Vertex snap is driven by the position of your cursor, not by the location of the vertex, itself. As demonstrated above, the snap only occurs when the cursor gets close to the intended vertex.

One of my favorite feature gems found when switching to Blender, the Auto-Merge function is a huge time-saver and can really speed up the modeling workflow. This feature will automatically merge vertices that share the same location in 3D space and works extremely well with the Vertex Snap Feature.

With an Edgeloop selected, press F to fill the hole and CTRL + T to triangulate it.

Centering the pivot, one of Blender’s stumbling blocks, can be a bit tedious. The best workaround I’ve found has been to enable the Dynamic Spacebar Menu plugin. You’ll have to remember some hot-keys for this one, but it will be committed to muscle memory in no time.

Tab into Edit Mode, make your selection or press A to select all, Spacebar > Snap Cursor Menu > Cursor to Selected, then Tab out of Edit Mode and press CTRL + ALT + Shift + C and select Origin to 3D Cursor.

Another Simple tool is the Knife tool. In Blender, it’s activated with the K key, and it automatically snaps to vertices and the mid-point of edges.

I feel that freezing or zeroing an object’s translation/rotation information is traditionally a good practice when finalizing a file. This is particularly true when importing the object into another software package or game engine.

Hit CTRL + A and select Location and Rotation and Scale.

Blender’s Edgeloop integration is also excellent. Much like its other commands, it’s tied to a simple key command, and learning it will drastically increase modeling speed.

While in Edit Mode, pressing CTRL + R will overlay an Edgeloop in Magenta. Scrolling up or down with the mouse wheel will add or remove additional Edgeloops to the overlay. RMB Click confirms the amount and allows you to slide along the selected edge for preferred placement. RMB Click will confirm and place the loops at the desired position. LMB Click will cancel out of the slide placement and will center the Edgeloops instead.

Soft Selection is one of the most powerful organic modeling tools in the Maya suite. A similar function, called Proportional Editing, is used in Blender.

Select a face, edge, or vertex and press O to enter Proportional Editing Mode. Hit G to grab and you should notice a white ring around your selection. This is the tool’s area of influence. Scroll wheel up or down to increase or decrease the affected area.

Switch between edges, faces, and vertices on the fly with this hotkey setup.

When in Edit Mode: CTRL + Tab

Changing the 3D manipulator orientation is a crucial element of modeling in any software package. I use this function all the time to set the Z-axis to the normal direction of faces.

In the Properties Shelf, hit the pull-down menu under Transform Orientations, then select from the available options.

Value for Indies and Students:

The recent explosion of independent video game development, crowdfunding, and digital marketplaces pulls an ever-increasing number of students in the arts and technology field toward independent development careers. Additionally, the cost for development has drastically decreased for independents, resulting from a recent shift towards lower operating costs, due to price drops for commercial game engines and other development software. With this context in mind, and understanding the difficulty educational institutions have with teaching current development methods, students are in a position where they have ample opportunity to excel, but lack the technical knowledge to do so. Due to the relative novelty of 3D independent development, and the tools used in its creation, there’s a lack of well-organized, concise, and thorough information. Most of the educational information available to beginners is either not free, dispersed, inconsistent, contradictory, or otherwise tedious to access. This environment requires that students waste their time cherry-picking between sub-par or incomplete resources, which is obviously not conducive to productivity. As a result, I hoped to demonstrate the practical application of the Blender 3D production software, in an attempt to better prepare students for independent development careers, and to aid in the transition from a high-cost product to a low-cost alternative.