In our earlier discussion of the world design of Innerspace, I noted that our game consists primarily of interaction between the player and his or her environment. Because the game focuses mechanically and thematically on exploration, we have to consider multiple dimensions of an environment design in order to craft a game world both aesthetically rich and mechanically engaging. When it comes to the way in which the player appears in Innerspace, a corollary logic and design methodology applies.

Because we set out from the start to make Innerspace a flying game with a real sense of physical weight and feedback, our design began with a few fundamental ideas. Simply put, we had to have a plane, or some similar vehicle, that could plausibly fly.

As we built our vision for the look, feel, and narrative approach of Innerspace, the design requirements for this vehicle became increasingly clear. Fundamentally, the plane had to support all of the planned functions and tools available to players throughout the game. Further, in order to maintain the game’s focus on exploration and discovery, the plane had to be a player vessel, not a player character. That is, it’s designed as a conduit into the world, rather than a narrative construct. 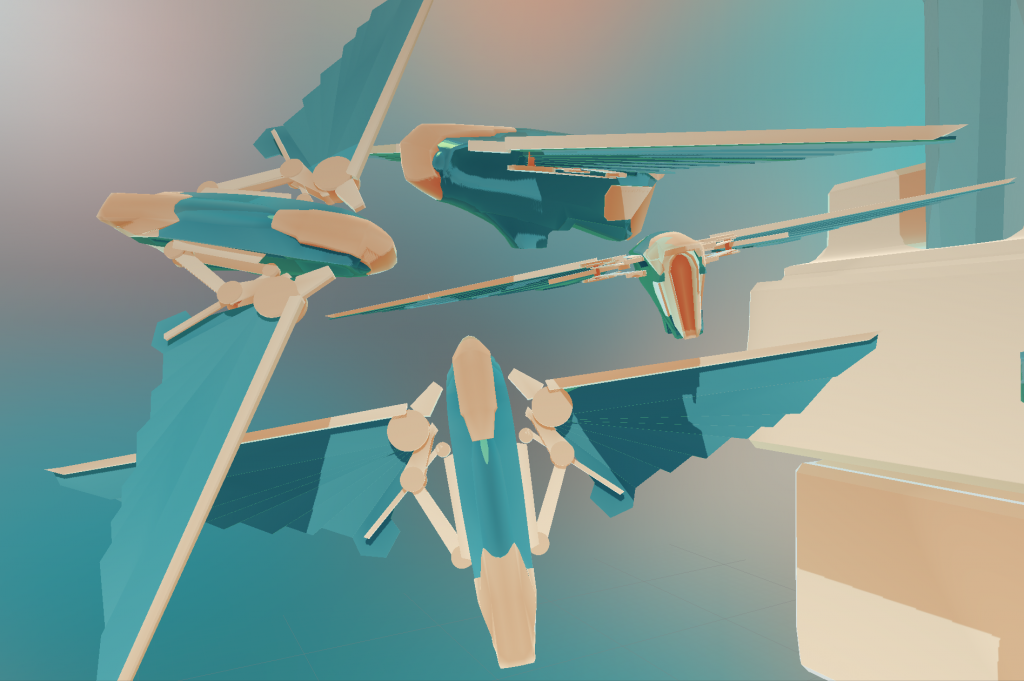 Mechanics: A Word on Wings

Our environments extend into the air and below the sea, and the player’s vehicle has to contend with both environments. The plane, therefore, has two forms: flight and diving. This dual role had an immense impact on the design. The fuselage needed to be water-tight and the engine capable of submarine propulsion. Most of all, we needed to integrate both modes naturally into the plane’s overall form.

Between flying and diving, the engine and fuselage had to remain constant and suitable for both air and water. With a tapered front-end, the plane could conceivably break the surface tension of the sea and execute successful dives. Similarly, placing the tail beneath the engine allows it to aid in navigation and fold up when diving or at high speeds for a slimmer form. Meanwhile, integrating the engine into the fuselage keeps the interior watertight and the silhouette simple. 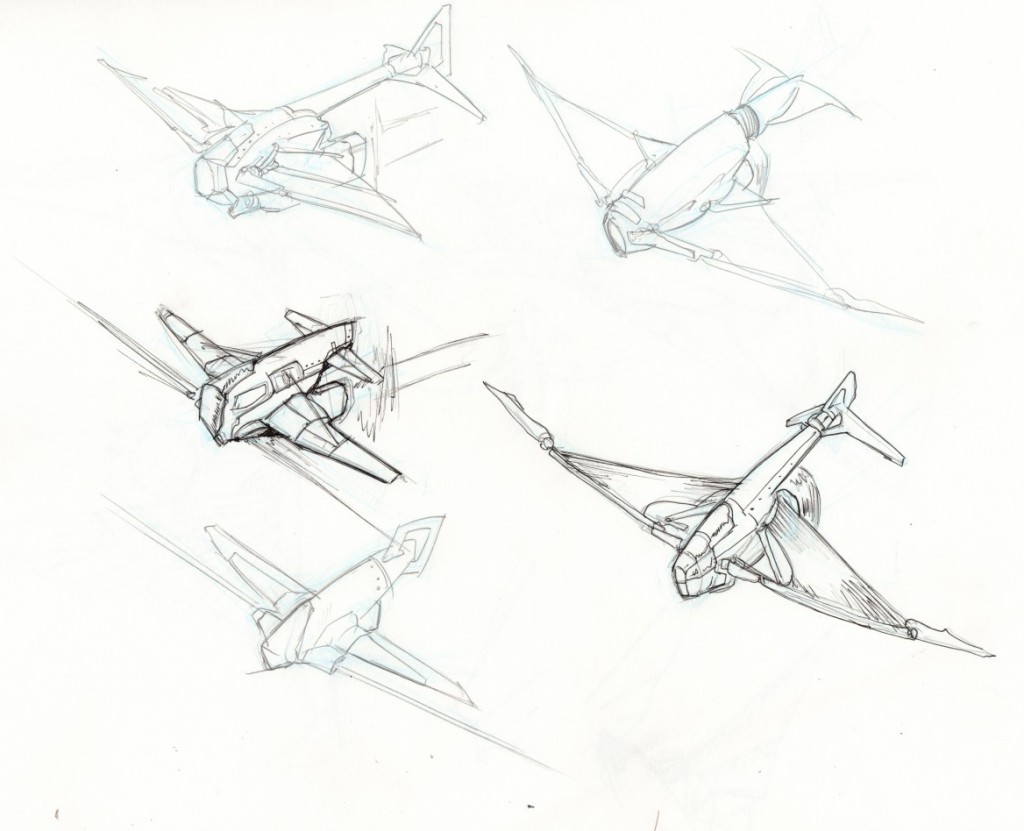 Preliminary explorations placing the engine beneath the wings and, in some cases, the tail.

Yet, the mechanics of navigation posed a problem. We had to find an elegant solution that gave us both airfoils for the sky and rudders beneath the waves. Many methods came to mind, including  telescoping wings that would collapse into the body, fabric strung on a batwing-like scaffold, or even metal gull-wings.

An early design getting some things right. This version played with fabric wings, an ocular cockpit, and propeller propulsion.

Each of these had their respective problems, but each led closer to the solution. We favored metal, not fabric. Folding laterally seemed to balance practicality and dynamicity the best. Meanwhile, the design had to accommodate a relatively wide wingspan, and the components had to be uncomplicated to model and animate. This is the end result:

A 5-angle orthogonal display of the plane with wings extended.

Color-coded animation notes, showing the folding of the joints and scaffold.

Two “stacks” of feathers compose each wing. Each stack is held together by a small column and two disks, which allow the feathers to rotate and are themselves joints in a larger rail-mounted scaffold. This scaffold can reposition the wings and is a key part of the folding process.

When unfurled, the feathers are designed to mimic the general silhouette of a bird’s wings. While we aren’t simulating aerodynamics in Innerspace, the two stacks are arranged in a rough approximation of an airfoil. This helps to further ground the design, helping it feel like a physically motivated machine.

The two stacks together form a somewhat solid shape that mimics an airfoil.

A Vessel, Not A Character

Innerspace doesn’t have a main character. Or, better said, the protagonist is the player. Rather than frontload the narrative with backstory, passive dialogue, and motivations outside of the player’s own experience, our game presents itself directly to the player. Nobody tells you where you are or what to do. This encourages the player’s innate desire to explore, discover, and improve. Moreover, it allows the world and its history speak for itself.

This hands-off approach to narrative means that designing the plane was about crafting a vessel that brings the player into the universe of Innerspace without imposing on them superfluous information.  This comes down to two design elements: capability and personality. 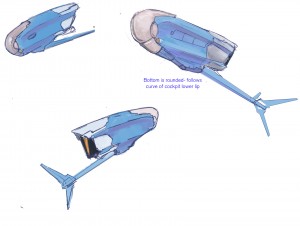 Perspectives on the plane in an old color scheme, focusing on the shape of the body.

Capability is the sense that the machine responds intuitively and organically to player input. This relates closely to the mechanical considerations detailed above, but extends beyond functionality. In concrete terms, making the plane feel capable meant considering and accounting for the type of flying on display. Namely, flight in InnerSpace is swift but not break-neck, agile without feeling rushed. This is matched in the design with strong wings, an angled silhouette, and the rejection of hard, aggressive edges. Similarly, the color scheme avoids military hues, angling closer to more active colors.

The animation of the plane also helps establish capability. Each feather is composed of two pieces, joined by hinges. Collectively, these allow the bottom half of each wing to serve as an aileron flap. Whenever the plane rolls, these splay out in piano-key fashion, lending good feedback to the player. Likewise, the animations for both diving and emerging from the water form distinct moments of transformation that prepare the player for a change in gameplay and scenery.

Personality, while harder to pin down, plays an equally important role in the design of the plane-as-vessel. Presenting the player with a cold, silent machine would likely characterize the entire game along similar lines. Instead, the design balances animalistic influences with a hardy metallic construction.

On one hand, the plane has a distinct bird-like quality: feathers hold it aloft, while a tail, like that of a tropical bird, glides below. The cockpit, viewed from the front, looks something like a parrot. This lends warmth to the design, helps establish an interesting silhouette, and gives more opportunities for animation. Meanwhile, the actual construction consists of articulated plates, pistons, and glass. Its engine, powered by some arcane power source, glows an electric blue. As a result of these two strains together, the plane retains anonymity even while visually distinct. 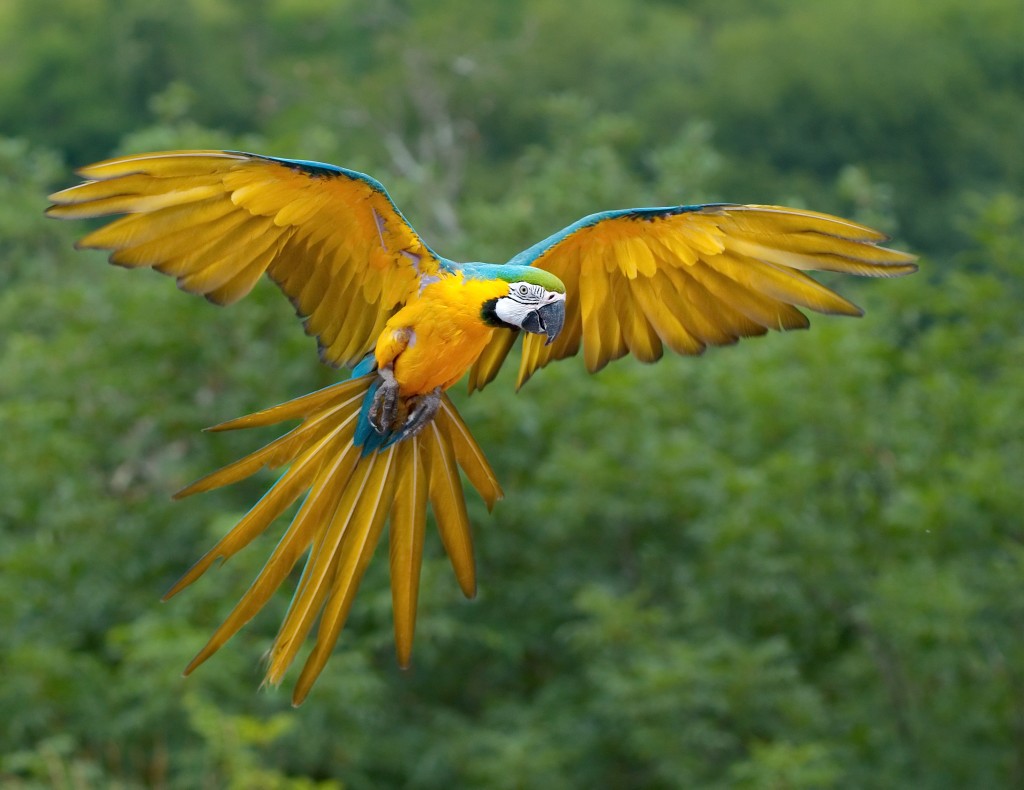 As the second big piece of our game’s identity, the plane took a lot of consideration, design, and re-design. It serves as the player’s avatar and their main tool, and has a range of concrete and abstract roles to fulfill.

Primarily, the design addresses all of the mechanical responsibilities of the plane, such as diving and the 3 axes of flight. In order to ground the player’s experience, considerations at this stage also included the plausibility of the design as it applies to the physical strain of diving and flying. While the wings weren’t tested for lift, the cockpit and engine, for example, are both watertight. The game mechanics required of the plane formed non-negotiable hard-points for its design.

Because players uncover tasks, goals, and narrative information purely through play, the plane itself must function as both an inviting, dynamic presence and an empty envelope. It’s designed to exude a friendly avian agility that imposes little, if at all, on the player’s whims.

In the end, we think it’ll take you where you want to go.