Here at PolyKnight Games, we’re making InnerSpace, which takes place in inverted planetoids.  This is really cool, but it brings up a lot of technical issues.  There are things we can’t do the typical way.  We share plenty of technical issues that are faced by games that use regular planetoids, but with some added “fun” on the development side. That being said, I’ll cover the core of the issue.

We face two base issues:

The first thing to define is up, north, and east, based on your location in the sphere.  In defining this we need to create arrows that point in the direction you must travel to reach the center of the sphere (up), to reach the north pole (north), and to reach what we’ll call the east-pole (east). The east-pole is the eastern most point of the planet, just like the north-pole is the northern most point.  This then defines a “local” coordinate system, which tells us which way is up, north, and south, see the picture below.

Next up we want to utilize a different coordinate system, which describes the player’s location inside the sphere.  The traditional coordinate system is called Cartesian coordinates and is organized in 3d-space with three values: (x, y, z).  This is a fine coordinate system, as the y value normally describes your distance from the ground and the x and z coordinates describe your location in space, but this isn’t fitting for a sphere.  Y does not define distance from the ground anymore and x nor z describe distance traveled.  Geographical coordinates are defined by angle from the equator and angle traversed around the equator.  It utilizes longitude and latitude, which replace x and z for distance traveled, and height, which replaces y for distance off the ground.  Calculating this isn’t as useful in a technical sense, although it’s very useful to the player.  This coordinate makes traversing the planet: #1 feel very official, and #2 Is more organized.  It’s easier to read and is less information than (x, y, z) coordinates.  The height, however, is useful.  We exclusively use this calculation for plotting maps, as the player takes the role of a cartographer.

If you’re interested in this from a programming perspective, you’ll want to make sure you’re fresh on your vector operations and your trigonometry.  I use a lot of Unity’s operations for example sake, but you’ll likely want to write out these equations yourself (I won’t explain the difference between vector operations / calling Vector3.Angle(a, b) and using a Asin(theta)/Dot product with proper vector projections (which accounts for planetary rotation)).

We will solve based on object location relevant to the current planet.  As you can see in the image above, green denotes up, blue defines north, and red defines east.  The thinner lines attached to each of the spheres denote the recalculated directionality.

The east and north are calculated as tangents of the arc, meaning they are representative of the sphere’s curvature at that exact point as a straight  line.  They do not point to the pole, but instead the direction you would need to travel to reach the north or eastern poles, while maintaining your current height.

For coordinates, we will convert our typical Cartesian coordinates (x, y, z) to geographic coordinates (longitude, latitude, and height).  For usual geographical coordinates, height (ht) is defined by distance off the surface (further from center).  For InnerSpace we’re backwards: height is defined by distance from the center (closer to the center).  Height becomes negative as you go further into the water, or past the surface (further from the center).  I calculate longitude and latitude the same as a standard (spherical) planet, though.

My source code (in C# for Unity3D)

Movement animation in the .gif isn’t included.  I implemented this differently for the game (mostly structurally and slight modifications to the what I calculate it).  But this serves as the simplest and shortest example I could think of.  I didn’t comment the code, as I think the code is pretty self explanatory.  If you have any questions, drop a comment down below!

The fix to this problem is simple: redefining up, east, and north requires little code.  It’s far reaching, and if you make a game like this, you’ll find yourself using these ideas, often.  Write the code in a way that’s easily accessible (I’m currently using a static class that belongs to an easy to type namespace).  Another method could be to extend the MonoBehavior object, but that makes it inaccessible from objects that don’t extend it.  And to the non-programmers that are terribly confused, I’m sorry that you couldn’t make up-or-down of this topic (pfufu).

Collisions.  How can you be inside a sphere, but not hit the edge?  How do we handle detection that you are inside the sphere, dry, or outside of the sphere, wet? 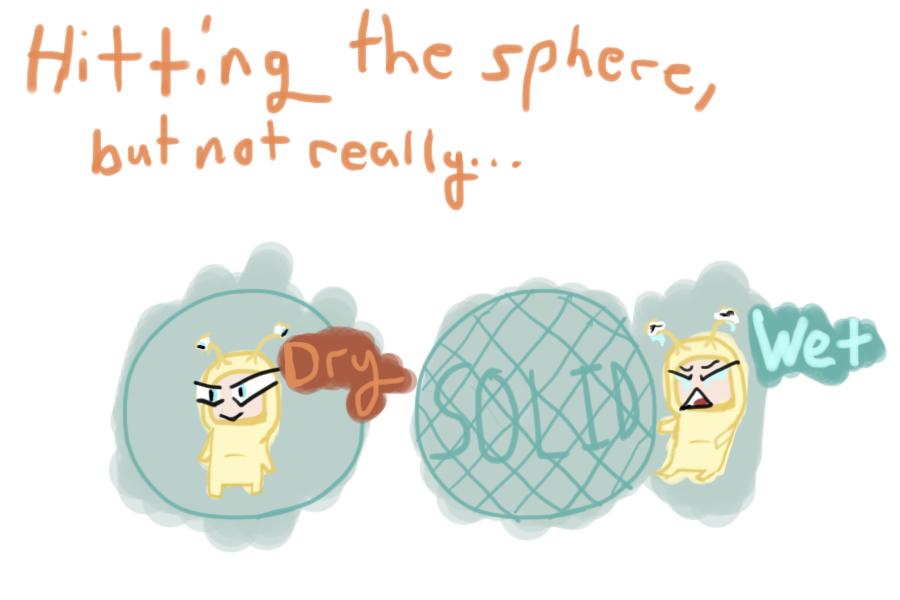