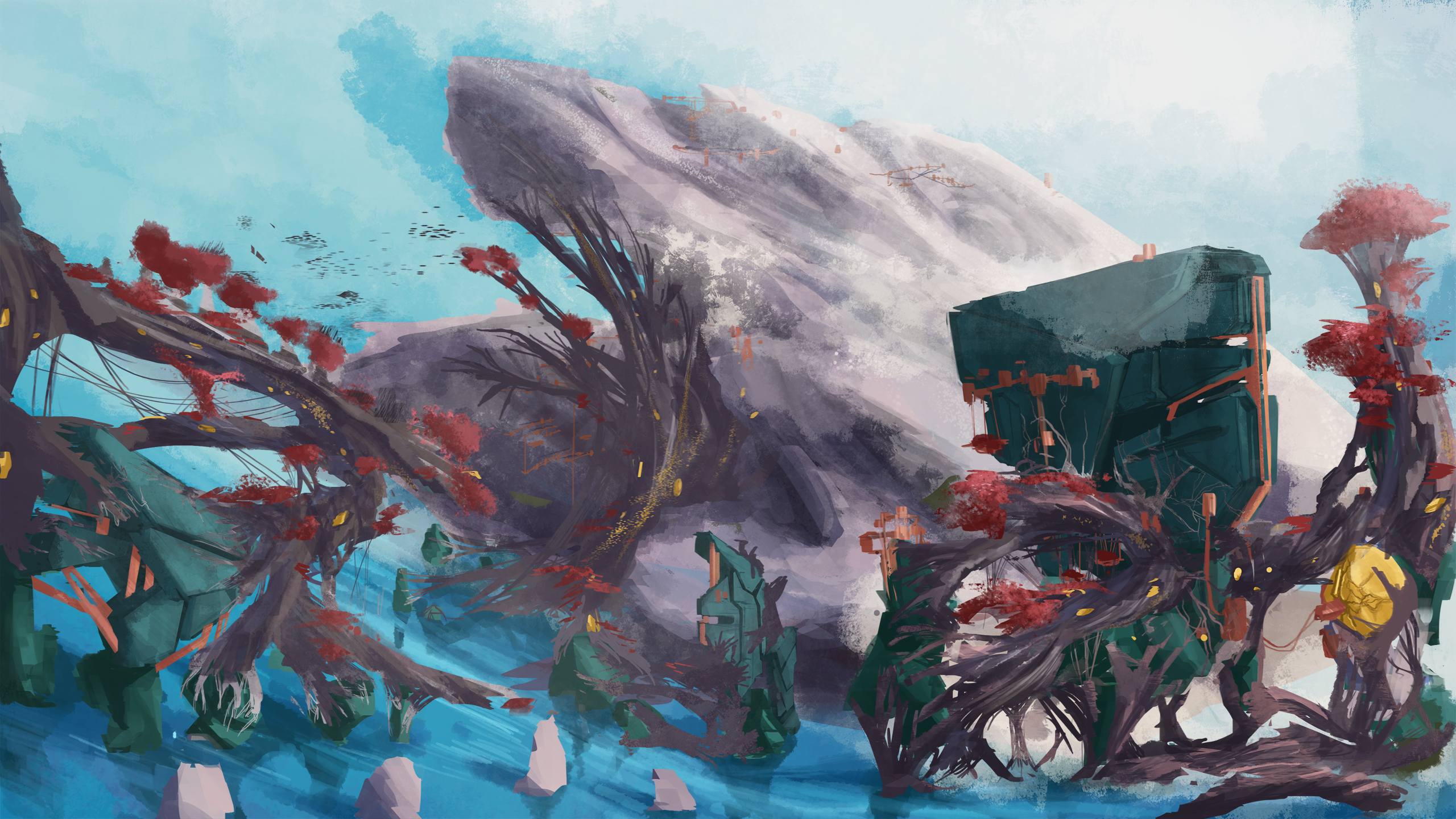 Excerpt from an anonymous journal, found among the ruins:

As we overcame the initial difficulties of our journey, a lull fell over the crew. For the time being, I had played my part, ceding to the engineers who would ensure our safety on the next leg of the voyage.

Unneeded, I sat transfixed by a porthole, watching as tendrils of fog gradually devoured the turquoise sea before us. The thin rattle of our hull and the hum of the engine, now running, pulled me into a deep sleep.

In my dreams, I flowed through a blank, boundless space. As I stretched into infinity, the roar of the ocean filled my ears until-

-I awoke to a terrible shuddering groan. The hull shook violently, casting off rivets like fleas with a dreadful groan. Alarms blared and chaos swirled around me as the crew rushed to keep her together. Then, as if a spigot shut off, the turbulence ceased. Light broke in from the fog.

We rushed to the bridge to look upon this new world. Before us, mist-shrouded viridian cliffs rose up from placid seas. Lying across these peaks like a dead beast’s limbs were thick, twisting vines crowned with crimson foliage.

Running low on energy and fuel, our travels came to an end upon  a great wind-worn bluff of peculiar cast, a pale purple mountain that stuck out from its surroundings. From here, we have gained vantage of the surrounding regions, and have been able to plan expeditions to many of the towers in our vicinity. Cast of verdant stone, those towers gleam like emeralds in the day. Everything here is as a gem clothed in the silk of mist. Surely, we will prosper here. 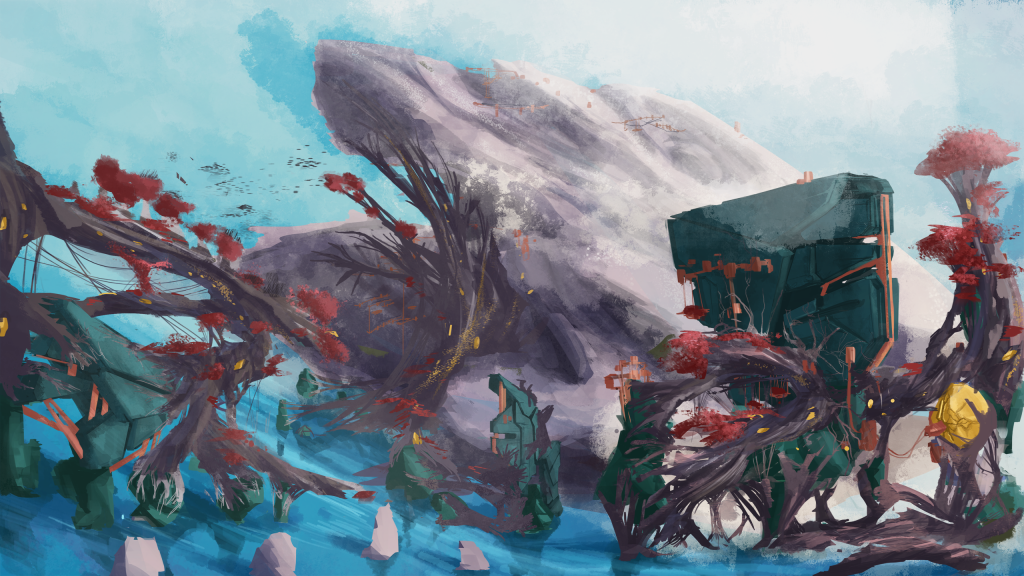 The primeval garden is a world where life runs rampant, where great vines break through terrain and structure alike, creating new landscapes as they grow.

Life here feeds upon the energy concentrated in glowing pearls, each a parcel of concentrated, cosmic energy gathered by The Mountain, the demigod of this sphere. 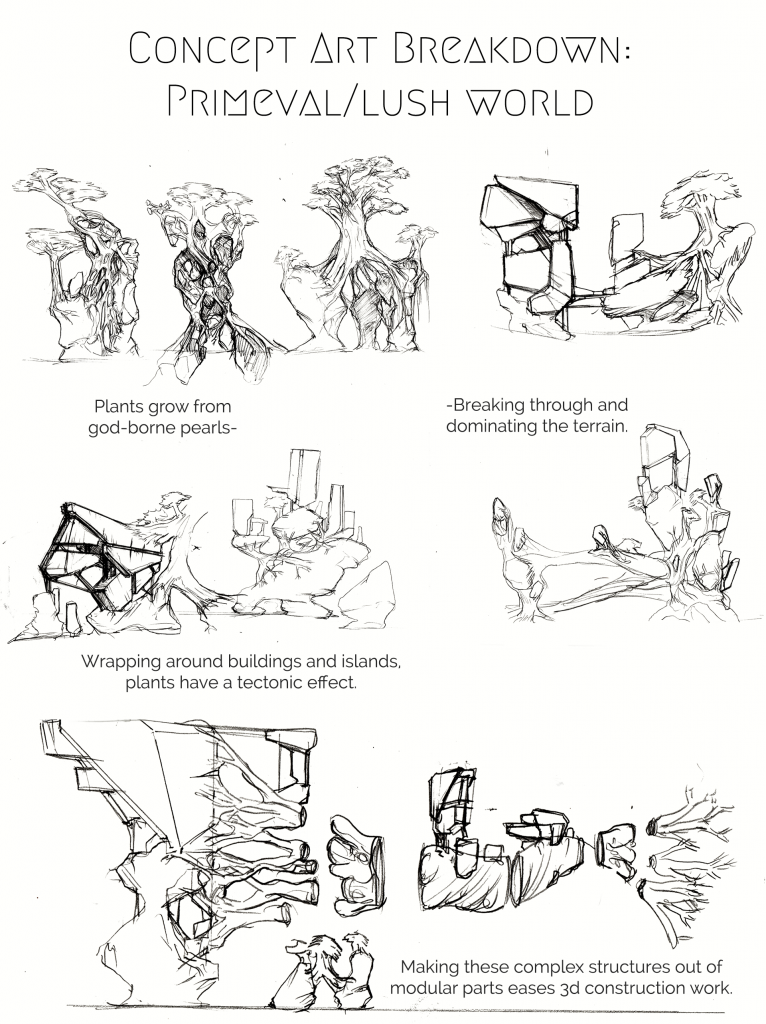 As The Mountain has grown, it has left behind its smaller shells to expand to yet greater forms. These old shells dot the landscape, rising high above the sphere’s cerulean waters and playing host to many secrets of their own.

Unlike other worlds, the fauna here feeds well on the natural bounty of their ecosystem. Yet, the unbounded energy in this sphere has caused more than just plants to grow to unnatural, dangerous proportions. Any pilot should be wary of straying into the territory of local apex predators.

In this world, players will face new environmental challenges and will uncover new chapters in the history of past civilizations, who themselves were shaped by new experiences here. With what they learn here, players will come closer to unraveling the central mysteries of InnerSpace.