Each world in InnerSpace has its own miniature cosmic order, underpinned by a marvelous creature. Collectively known as Demigods, these take myriad forms. Some are beneficent, others hostile or destructive. In all cases, they play an essential part in the order of their surroundings. The creature and its world are in balance and, if one should go amiss, the other would suffer.

As we work on the design for InnerSpace as a whole, the role of each of these creatures, their appearances, and the way in which the player interacts with them has become increasingly clear. The encounters with these beings are shaping up to be a key piece in the mythos and actual experience of InnerSpace, and we’d like to share a bit of the process behind their conception.

Some of the earliest ideas for Innerspace focused on the Demigods. Originally, they were conceived of in somewhat traditional terms, as huge “boss” creatures that, in some way, would test the player’s flight-and-fight skills. These would be interesting creatures to match the environment, and their origins would be mysterious- but hinted at. While elements of this approach have survived to our present design, the biggest difference between now and that initial phase is the degree to which we understand the Demigods as keystones in their respective worlds and ecosystems. 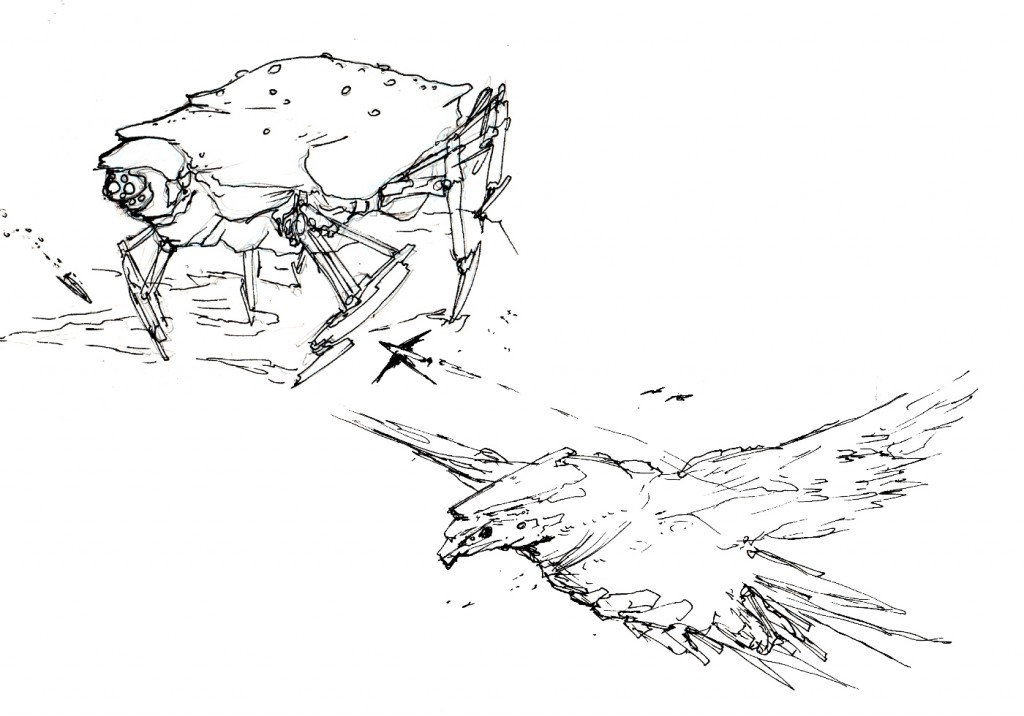 Early creature designs had what became essential elements of later designs. These original drawings had a distinct mix of mechanical and organic elements which, as InnerSpace developed, became less and less relevant to the setting and its mythos. 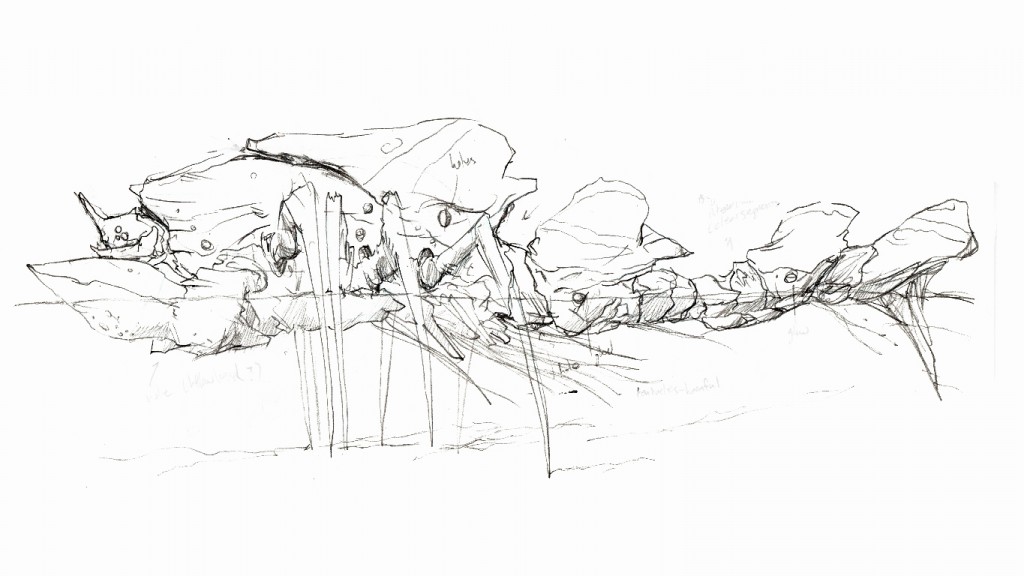 The crustacean demigod in its second incarnation. A mix of crustacean and arachnid forms, this got closer to our ideal of a moving island, but felt somehow too derivative.

As the worlds of InnerSpace got increasingly detailed, it became apparent that the two demigods would serve as wellsprings of life as well as inspirations for culture. These creatures are rooted to the relatively mundane lifecycles of their environment. But, they’re not just “big animals.” Instead, they’re tied to the cosmic, to the systems undergirding the very existence of the inner-spaces themselves. 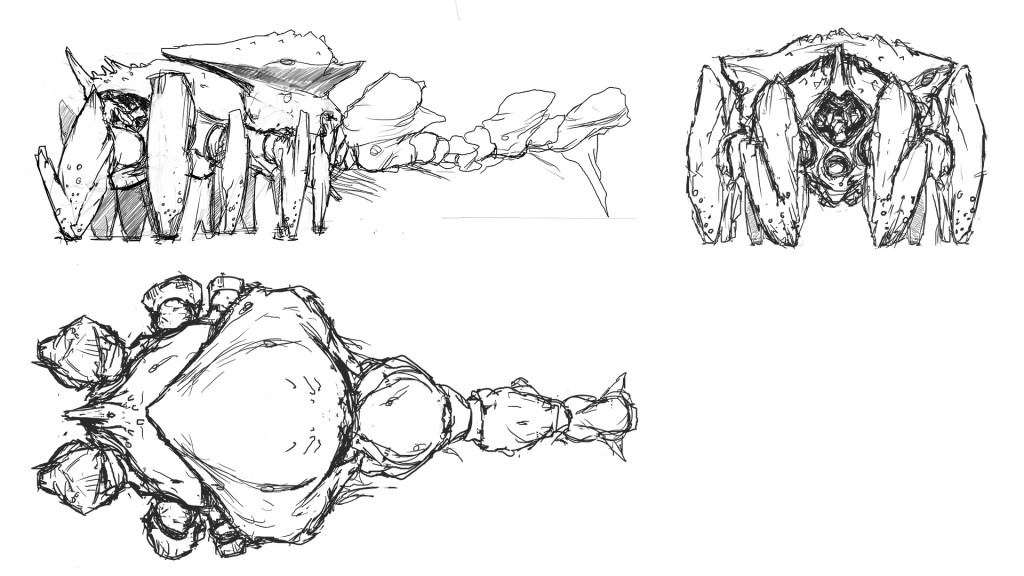 “The Mountain,” our crustacean in its current form. A great mass of shifting, stone-like carapace with a great maw, this creature is a fixture of its landscape.

The crustacean Demigod, which may as well be called “The Mountain,” is a good example of the way in which this ecological role influences creature design. An enormous crustacean-like being, the Mountain is responsible for seeding life around its sphere. Fissures in the seafloor leak heat and cosmic energy which it gathers via specialized organs in its underbelly. As with minerals in an oyster, the excess energy is deposited inside pockets within the creature’s carapace, forming energy-filled gem structures. As the creature molts or brushed against abrasive terrain, these fall off. The concentrated energy bursts into the immediate environment, fostering lush and rapid growth of flora and fauna. 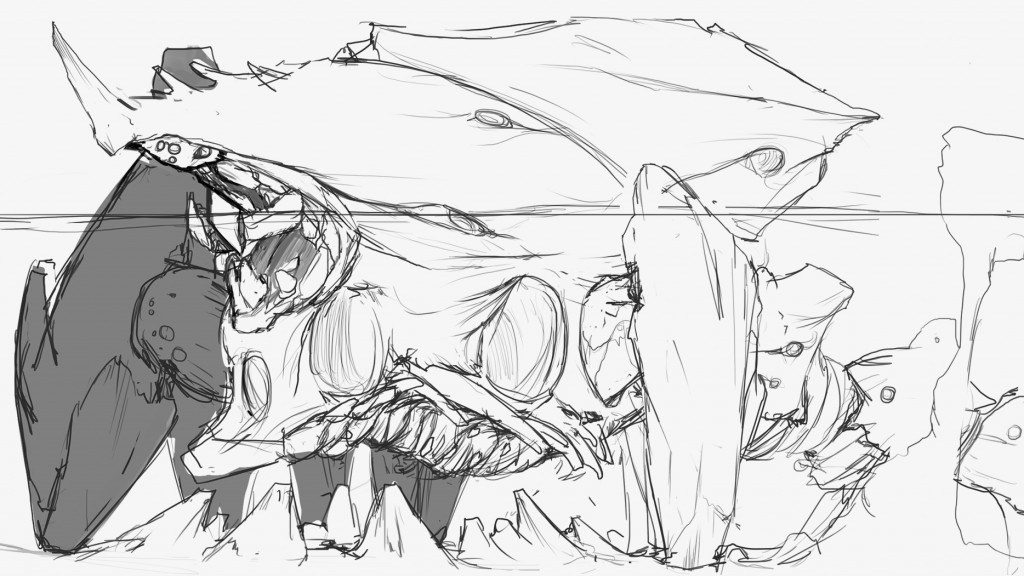 The Mountain “feeds” on energy leaking into its sphere.
The left claw and anterior leg are left off here to show the opening of plates on the creature’s underside. Exposed, an energy-gathering organ.

These creatures also have an effect on the cultures that witness them. In the Mountain’s world, inhabitants may gravitate towards or enshrine the verdant areas around its gems. Likewise, they may integrate that material into their structures. In the world of “The Cloud,” a bird-like demigod, feather and wing motifs dominate architectural expression, influencing the shape of towers as well as the organization of structures in relation to one another.

Ghost in the Machine: Gods and Gameplay

Encountering these creatures provides a dramatic conclusion to what amount to chapters of exploration in Innerspace. Given the nature of these creatures, these meetings are thematically loaded moments and we are faced with the challenge of conveying this monumental encounter through gameplay.

Though the Demigods look like bosses and, indeed, it’s easy to describe these climactic scenes as “boss battles,” these encounters are not directly destructive. At most times, the player’s tools are ineffective as weapons. In a broader sense, the outright destruction of these beings may not lead to a solution to the problem at hand.

The climactic aspect of these divine face-offs also applies to gameplay mechanics. Though they are singular entities, the Demigods have to open themselves to methods of interaction that exemplify, rather than be exemptions to, our gameplay systems. Because our systems are geared towards exploration and environmental interaction rather than combat, this poses a fascinating challenge.

“The Cloud.” Elusive, this bird-like being lacks the armor of its submarine counterpart, but harbors its own secrets. Though it may not have as visible a role in its world’s ecosystem, it nonetheless plays a vital role in the lifeforce of its sphere.

On one hand, we’re considering shaping encounters as interactions between player, Demigod, and environment equally. “Solving” the encounter may not require defeating, but rather aiding, a creature. With The Cloud, the elusive bird-god, simply finding and understanding the behavior of the creature plays a large role in finding a solution. Connecting that creature’s form and movement to its surroundings is also important.

We’ve also been led to think about the Demigods as environments in and of themselves. The Mountain has a huge carapace, much of which is actually empty chambers and twisting tunnels, formed naturally but vacant of any organs. Though the outer shell may prove impervious to the player’s tools, exploring around- and in- the Mountain may lead to more productive solutions not otherwise apparent.

After phases of exploration and discovery, each chapter of Innerspace culminates in an encounter with a massive creature. So far, we’ve described these beings as Demigods, a phrase that hints at their size and power. Though creatures born of a concrete reality, Demigods are often the source of life in their worlds. They’re tied closely as they are to cosmic energies from the universe beyond the sphere.

In the game, finding these creatures is a task of its own, and the nature of one’s encounter with them is determined largely by the state of their world. Will one need to restore order, or must a Demigod’s energy source be wrested free from within? Do these creatures flee the player, or hunt? As one finds the trail to these beings, both their mechanical skill and observational wit will be tested.

We have much more to say about these creatures and their designs, as well as the worlds they inhabit. In the interest of maintaining surprise, we haven’t spoken about many things, such as: what happens if you manage to kill one of these creatures? Or, what does one do with the energy gleaned from a Demigod? As the game progresses, keep your eyes peeled for answers to these and other questions. They’ll be waiting for you.